Guwahati City is the capital city of Assam and gateway of entire North-East. The city is affected by the flash flood and heavy rainfall during the summer. The rain water coming from the Meghalaya and surrounding hills caused major devastation of the roads and drains, heavy siltation and tremendous problem of water logging. Some of the areas of the city used to be inundated and those areas under the flash flood water for several days in 3 to 4 waves damaging the existing infrastructure including the govt and public properties. The city of Guwahati experiences recurrent flood inundation and severe water logging in the occurrence of storm events and particularly during the rainy season, it has become a public grievance.

Rapid urbanization with increased housing and construction activities in the city leading to increased in number of buildings, streets and other impervious hard surfaces, and more importantly the decrease in the number of inland wetland pockets and clogging of drainage systems has led to indiscriminate flooding. This has resulted in decreasing land capacity to soak up and carry excess storm water.

Moreover, the unplanned expansion of the city to accumulate increasing population has lead to severe encroachment in the wetlands, low lying areas, hills and shrinkage of forest cover .These denuded hills and loss of wetlands thus lead to artificial floods and water logging. Immediately after every down pour the city drains gets filled up with silts coming with storm water running down the hills results on flooding the streets, house etc. The wetlands also cannot retain the excess storm water of the city. Urban Flooding Scenario of Guwahati has drastically undergone incipient flooding and inundation pattern in the last decade. The rapidly developing metropolitan environment has indiscriminately changed the large vacant lands, natural drainage controls, etc. Some of the roads have no road side drains and some have inadequate gradient and storm discharge conveyance. 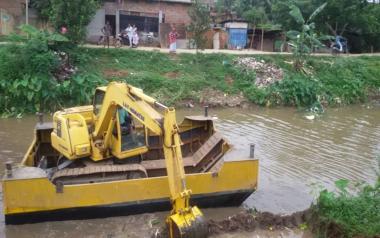